Season 1 of The Bad Batch on Disney+ has ended, although Clone Force 99 and Omega will continue to be shown on the streaming service. Ahead of its two-part finale, the animated series was revived for a second season. It’s a good thing, too, because our time with the Batch didn’t exactly end on a high one. Perhaps season 2 of The Bad Batch will bring their story to a close.  Fans of the program have been taken on adventure after adventure as this mismatched crew tries to find their place in a rapidly changing galaxy for 16 episodes.

In an environment where an oppressive regime has gained control, The Bad Batch has addressed topics of autonomy, agency, and what it means to be a soldier. The season’s conclusion marked the end of an era in the Star Wars universe, concluding the season-long quest to find out how to clone troopers that were phased out of military ranks across the galaxy as the Empire rose to power. Where will the show move next, and when will the second installment of the Batch’s tale be released? This is what we know so far.

The Bad Batch Season 2 Premiere Date has been Confirmed?

The Bad Batch’s second season will premiere on Disney+ in 2022, but there is no plan for a May premiere. On May 25, the highly anticipated Obi-Wan Kenobi limited series will be released on the platform. Following that declaration, the question of whether The Bad Batch will return in the spring of 2022, as reported in a Star Wars Insider issue, arose.

Fans were right to be skeptical of the animation series’ spring release timeframe, according to The Direct, whose source is a Reddit user with the pseudonym BZPJMJ64. The Bad Batch season 2 will be released shortly, rather than in the spring of 2022, according to issue 209 of Star Wars Insider. How soon do you think it will be? If it does miss spring, it will most likely be summer.

While Andor is also planning to premiere in 2022, Disney+ wouldn’t put Obi-Wan Kenobi and the Cassian Andor series on the same timetable. The Bad Batch’s second season would serve as a buffer between the two series, providing more content for Star Wars fans while allowing their tentpole shows to have the cultural impact they desire. Andor is expected to arrive in the fall, according to The Direct. 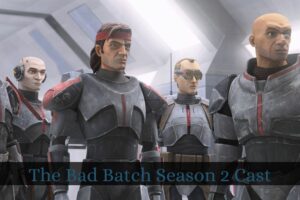 Despite the huge amount of destruction in “Kamino Lost,” everyone made it to the season finale alive. As a result, we should expect to see all of the Batch members, including Omega, as well as the young clones droid, return.

The following is a list of possible season 2 cast members:

It is time for the new Era. Watch the trailer for the new season of Star Wars: #TheBadBatch. Coming to @DisneyPlus this Fall. pic.twitter.com/kW0rOqd93K

Given the conclusion of season 1, season 2 of The Bad Batch is likely to have a dual plot once more. Despite the fact that the air between Crosshair and the rest of the Batch had been cleared, they had parted ways because they essentially believe and want different things. The Batch has gone back to being mercenaries, while their sharpshooter waits for the Empire to return and find him. They aren’t on different sides of a growing battle right now, but they will be in the second season.

The Batch will have to choose whether to fight alongside the rebels or keep out of the conflict entirely at some time. Because they disagree with the regime’s actions, the Empire is not a choice for them. The conflict between Crosshair and his siblings will almost certainly resurface in the second season.  There’s also the final scene, in which Nala Se is transported to an Imperial facility. The Empire now has authority over its scientific theories and cloning technologies. It’s unclear where they’ll go with this story element, but it’s possible we’ll see it again in season 2.

We’ll keep you updated as more information about The Bad Batch season 2 becomes available. Keep an eye on Pabaon.com!