Fear The Walking Dead Season 7 Episode 15 Here’s Everything You Need to Know!

The survivors’ struggle to escape the burning Tower and radioactive walkers are the focus of the fifteenth episode of AMC’s post-apocalyptic series ‘Fear the Walking Dead’ season 7, titled ‘Amina.’ Alicia is rescued from the Tower by Daniel, Luciana, June, Dwight, and others, who inform her that they are rafting out of the region. The disguised girl recognizes Alicia and guides her back to the Tower in pursuit of the latter’s friend. Victor Strand finds it difficult to let go of the shelter he created. Let us decode Alicia’s life-altering decision for you at the end of this episode! WARNING: SPOILERS AHEAD.

Recap of Season 7 Episode 15 of Fear the Walking Dead

After rescuing Alicia from the building’s roof, Alicia’s companions prepare to flee the Tower’s neighborhood in ‘Amina.’ Strand has opted to remain at the burning building, and they notify her. Alicia sees the disguised girl who saved her when she passed out multiple times while relaxing on the beach. The girl seeks Alicia’s assistance in locating her companion, and the two proceed to the Tower. Alicia is hopeful that the girl’s friend will be able to lead her to PADRE. Alicia passes out halfway through the mission and wakes up after some time inside the MRAP. She comes across a tape labeled “Amina.”

Alicia tells the girl that she has been bitten by a walker and will soon turn into one. The girl shows Alicia a bite mark on her palm and admits that she, too, was bitten. They arrive at the Tower’s premises, but Alicia passes out once more. She is rescued from the walkers by June, Dwight, Daniel, Luciana, and a few others, but she insists on returning to the Tower to save the girl and her friend. She enters the Tower alone, with the support of the followers, and finds the girl. She informs Alicia that her friend’s name is Victor Strand. Alicia approaches Strand and persuades him to join her in escaping the burning building.

Meanwhile, Alicia notices a bird and tries to get it to fly away by opening the window. The girl removes her mask and cracks the window to allow the bird to fly. The girl tells Alicia that she is Alicia’s younger self, indicating that the girl is nothing more than a figment of her imagination. Alicia and Strand ultimately leave the Tower and enter the MRAP, where they seek assistance from Luciana. Alicia and Strand arrive at the beach, while the rest of the group prepares to leave on rafts to a secure location such as PADRE.

Why Does Alicia Save Victor Strand in Fear the Walking Dead Season 7 Episode 15?

Strand refuses to assist Alicia’s followers after realizing that she will never forgive him for killing Wes. Strand refuses to join her supporters in their attempt to save Alicia. When he realizes that Alicia will never accept or love him, he chooses to die in the Tower. Strand isn’t afraid of dying because he doesn’t have anything else to live for. Alicia, on the other hand, arrives at the Tower as her subconscious conjures up an image of her younger self in order for her to save Strand. Strand is the closest she has to family, despite their differences. Her subconscious wants Strand to be safe, even if she decides to abandon him to die.

Strand assures Alicia’s devotion to him before leaving with her followers. Despite the fights they’ve had over the years, he’s treated her like a daughter. Strand has never been a favorite of Alicia’s. Her opposition to his decisions and values has always been strong. She remembers the wounded bird she treated back to health before the apocalypse as she knows Strand is left to die at the Tower. Strand is a wounded bird who is deserving of her attention as she recovers her emotional health. Furthermore, Alicia recognizes the importance of Strand to the safety and future of her people.

Since Alicia is dying, her supporters require someone ambitious and tenacious to lead and protect them, particularly in the face of unknown dangers. With her health failing her, she recognizes she can no longer lead her group and passes the baton to him. Strand’s objectives have always been built on showing his worth to Alicia. As a result, she is confident that he would give his all to prove his abilities to protect her followers as she entrusts him with their lives.

Why does Alicia refuse to leave with the others? Why is she returning to the Tower? 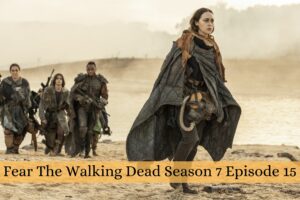 When Alicia’s supporter’s board rafts to depart the region, she decides not to join them. She realizes that, as a result of her regular fainting episodes, she will only slow down the rest of the group. Alicia does not want to put the safety of those who have trusted her in jeopardy by requiring them to look after her in the face of danger. Her fever and fainting spells make it clear that she is nearing the end of her life. Alicia may never be able to see someone die for her again after witnessing so many sacrifices.

Furthermore, Alicia wants to remain on the scene in case any survivors arrive at the Tower’s location after hearing the message she sent through the transmitter. She feels responsible for the lives of those survivors who may reach the Tower as a result of her remarks, only to be confronted by radioactive walkers and exposed to radiation. To avert a situation like this, she chooses to devote the rest of her life to ensuring the protection of the survivors as they hunt for a safe refuge.